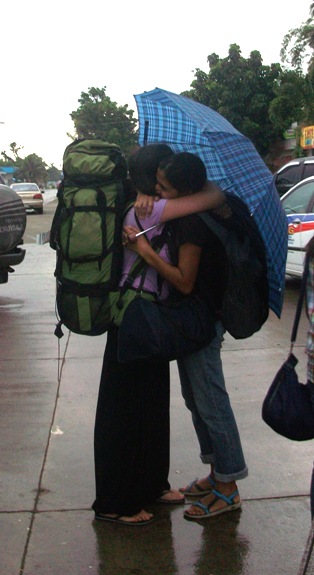 I'm not a very physical person. Most Indians aren't. Spontaneous hugs are pretty unusual. It's not a part of our culture. Or most Indian family cultures. (Ooh look, I DO have something in common with most Indians.) I still remember a friend casually draping her arm around me when I was 14... and how strange I found it. 'Free Hugs' would not be a good idea on an Indian street.

Indians not only avoid hugs, but often even handshakes. At Mass, we fold our hands and bow slightly, in the 'Namaste' posture at the sign of peace.

There are people who hug. But some huggers repel me- because their hugs are fake. They don't mean what they're supposed to mean. Sometimes they create a false sense of closeness. I can't hug you if I don't know you. Or they remind me of air kisses. I can't hug you if you're just hugging me because that's what your social convention tells you to do. The kind of hug says a lot about what's in your mind. If it's brief, controlled, tense... it's not a real hug. Just say hi instead.

And then there are the creepy guy-huggers, who use hugs to force intimacy on unwary girls. Ugh. Keep away from me. Hugs from people who are not used to hugging as a healthy way of expressing affection are creepy hugs. I'd rather get an awkward shoulder pat than a creepy hug.

The wrong kind of hugs make me want to stay away from hugs. But also, I'm just not a hugger.

But here's the thing. We NEED hugs. I need hugs.

Well, we need whatever a hug really is. What is a hug? What's happens when one person envelops another in their arms?

Contact. Physical affirmation that I'm not alone. Connection, Intimacy. Touch. One-ness. Being drawn out of 'me' into 'us'. Community. A taste of being loved- One of the most basic human needs. A glimpse of heaven.* Being drawn out of isolation. An unspoken 'I'm with you'.

After my two nieces came into my life, I learned a lot more about how important meaningful physical contact is... for them and for me.

My three year old niece is not a hugger. She's kind of like me- does her own thing, will only love on her own terms, when she feels like it, how she feels like it. When I beg for a hug, she runs away and flashes that mischievous grin at me. She doesn't cling, or beg to be carried all the time.

But after a while she comes to me.

"Now I'll be your baby. With a blanket."

At first, I wasn't sure what the game involved. She curled up in my arms, her body cradled against mine, a bed sheet wrapped around her. And that was it. She stayed there for fifteen minutes, occasionally cooing a little. And then she continued with life as usual. Every time we hang out, we have to play 'baby' for a while. She found a way to soak up the love, the closeness, the physical reminder of a deeper truth- she is loved.


Before my husband leaves for work, I have recently begun asking for a hug. My husband and I both are life-long touch-me-nots. We've often congratulated ourselves on this feature in our relationship–” Aren't you glad we don’t have to touch each other all the time? How do people get anything done?”

Lately, however, it has become essential for me to be wrapped in someone and something bigger than myself. I just want to get to the core of us, where the presence, God-willing, sometimes is.

At the Resurrection Christ told Mary Magdalene “Stop hanging onto me.” And my husband occasionally follows in the footsteps of the Lord. “How long is this going to take?” he wants to know. He’s holding a cup of coffee, which I take and set on the counter. At this point I have often not dressed or brushed my teeth. I’m still wearing my glasses, and I can see that this is a great sacrifice for him to be receptive to this outside object interfering with his forward motion. Inertia is the enemy of love.

“Ten seconds,” I say, as he submits, possibly counting inwardly. “It’s good for me. It’s probably good for you too.”

I am recalling the Irish brogue of a priest I once heard talking about men who have forgotten how “to use their strong arms for loving.”

Strength is for loving. And those ten seconds supply me with most of my needs for the day. I recall this sensation, when the little boy with the lego tractor has been following me around the room. Anywhere I sit down, he sits down too.

“No.” He weasels his feet under my thigh, which feels irritating to me. Toes pinch.

So I put down what I’m holding, whatever it is, and hug him for ten seconds. Unlike some of my other kids, he doesn't protest. Then he slips to the floor, tractor in hand, and pushes it out of the room. (Read the whole thing here.)