7QT: Videos You Want To See

The first video that I'm not linking because it was banned in India. But if you search you might be able to find it online.  And if you can't, here is a partial transcript. WARNING: GRAPHIC VIOLENT CONTENT

It is a documentary made by BBC about the rape of a girl in Delhi little more than two years ago. It is gruesome and shocking. But what's worse is that this is just ONE case among thousands, many of which go unreported. And even more shocking is a culture in India that blames and shames the victims. Something HAS to change!

Worst quote: " You can’t clap with one hand. It takes two hands to clap. A decent girl won’t roam around at 9 o’clock at night. A girl is far more responsible for rape than a boy." One of the rapists

Jennifer Fulwiler, one of my favourite bloggers speaks at a Catholic conference. She's very down to earth, always real, and always has something to say that I hold on to.

For some reason, I just want to keep listening to this. It also makes me want to harmonize.

The Much Awaited Flash Mob Video: Starring Me and My Friends! (Yes, grammatically incorrect, I know)

Regular blog readers will remember a mention of this event in the P.S. of this blog post: Flash Mobs. And it happened! The groom told us he loved boy bands (how come self-professed unjudgmental people think it's okay to judge people for liking boy bands? Personal preference, people!) Neither he nor the bride knew it was going to happen, and they loved it!

How to Grow in Times of Trial by Fr. Jacques Philippe

I LOVE Fr. Jacques Philippe! The Peace book that he wrote has become my favourite spiritual book, and now I'm reading 'In the School of the Holy Spirit' also by him, which is rocking my world! So Lenten reflections by him... great idea! (I don't know why I was surprised that he is French and speaks French with a name like Jacques Philippe.)

I'm usually a little suspicious that these kind of videos are going to try to be emotionally manipulative, but I found this very touching, and very authentic. The little girl didn't seem very different from other little girls that I know.

Why I'll Never Be Happy


I usually enjoy Blimey Cow, but when I watched this one, I was like "This. Is. Me."

I have every reason to be happy... but my mind always seems to be focussed either on the present seemingly HUGE disaster, or the potential future disaster that is JUST. AROUND. THE. CORNER.

I need to remember... Today is the only day I have to be happy.

More QTs at This Ain't The Lyceum.
Posted by Sue Zanna at 00:06 No comments:

Every now and again something happens to remind me what a privileged and protected life I lead in India. I live in a big city, in a housing society, in an apartment in a group of building enclosed in a compound (called housing society). It's not particularly fancy, but it's safe, and kids can run around without being scared of being run over by traffic.

A few days ago I went to a repair shop just outside our society to get our blender fixed. As I waited for the shopkeeper/repairman to fix it, there was a sudden disturbance. A group of men started yelling at each other just outside the shop. There was so much anger and violence in their voices. Within a few minutes, the violent words changed into actions, as people ran and joined the fight, grabbed iron bars while yelling at each other in Marathi (which meant I didn't know what the fight was about). It was so freaky! It's like I could see evil controlling these men. I started praying under my breath, while fear gripped me. I thought I was about to see a murder. People gathered around, but it didn't seem like anyone could stop them, though some tried. Thankfully the main angry guy zoomed off on a bike, and I left, not at all sure that he wasn't going to return with back up.

I was really upset. And then I realized, this was normal life for so many, including the kids I teach in the slum. How much trauma they must have been through.

Which is one of the reasons I am so blessed to be able to show the kids we teach a glimpse of the world outside the violence-ridden slum in which they live. I do that through talking and sharing with them as I teach them, talking to them about the different countries of the world, introducing them to books, Story Club, picnics, and last week a special Valentine's Day activity at my home. 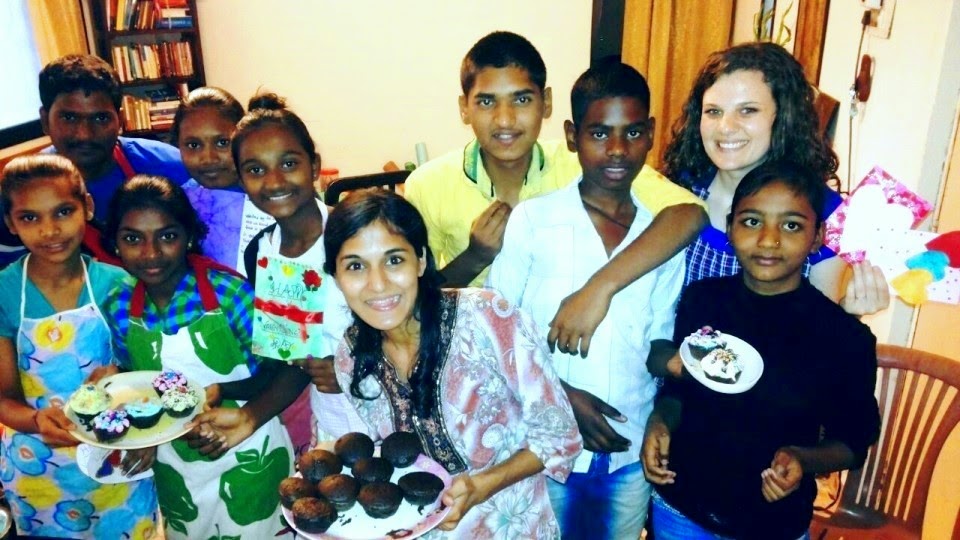 We only took the 7th and 8th graders (me trying control the potential chaos by NOT inviting the crazy under 12 year olds). We taught them how to bake and decorate cupcakes, wore aprons (to the embarrassment of the two boys who came), make Valentine's Day cards for people they love (NO BOYFRIENDS OR GIRLFRIENDS!!), ate lunch together, packed the cupcakes in cute little boxes with ribbons,  and just had such a good time together. The kids loved it! 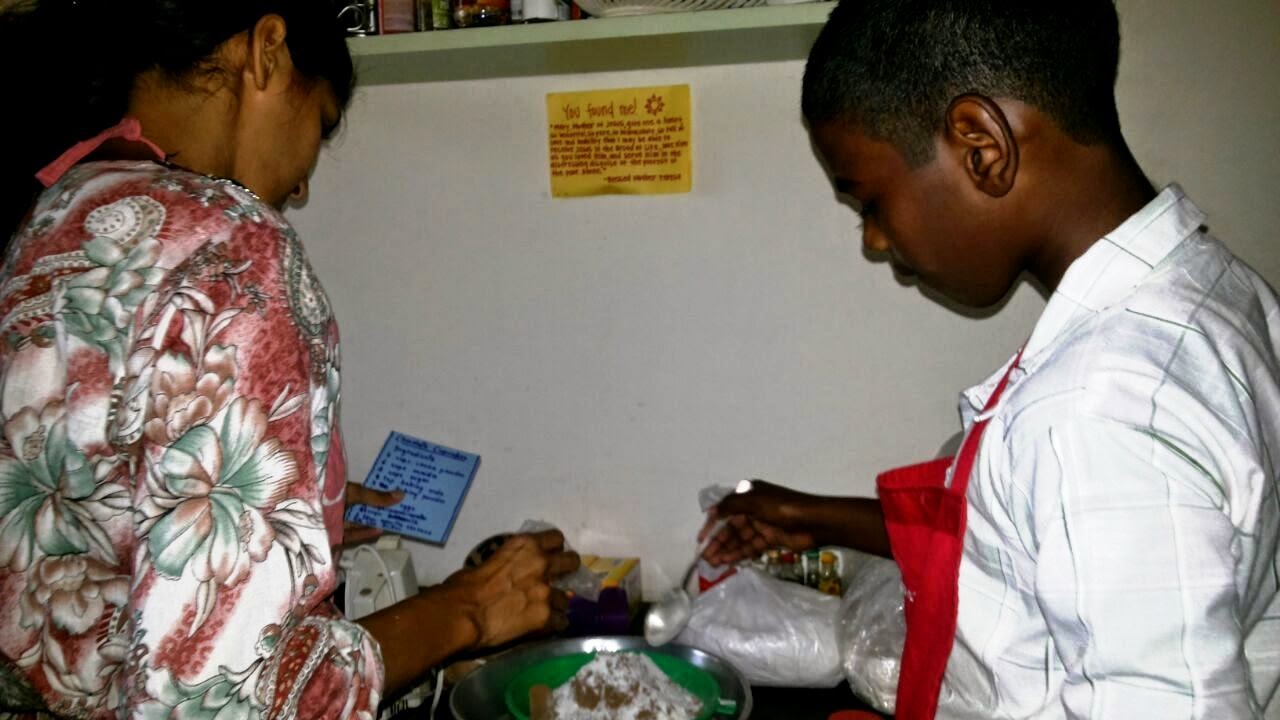 Speaking of love, I've been reading some cool blog posts about marriage. Yes, I know, I know, for a single woman, I sure read a lot about marriage. I think though that a lot of the things I read apply to any kind of relationships to some extent.

This one speaks more about the fact that sometimes marriage (and relationships, and life) are just hard! And that means if someone is struggling or has a hard marriage or life, it's not necessarily something that can be fixed, if you just work harder, or better, or get counselling. Sometimes life involves suffering, and you just have to accept those times without feeling like guilty about that too.

And another beautifully real one:

Don’t buy what anybody else is selling: Everyone always marry wrong.

Because what’s wrong in the world is always us.

Marriage and love and time, these are the enormous forces that inevitably chisel and change us into strangers. The springs sag. Mattresses sigh. Marriage changes us into strangers who have to meet and introduce each other to love all over again.
None of us ever know whom we marry. And falling in love never made anyone angels… it’s only made it clear how far we’ve fallen. Who we say ‘I do’ to — is not who we roll over to touch twenty years later. The challenge for the vows is to fall in love with the stranger to whom you find yourself married.


How crazy it seems that we get our views about love, romance and marriage from stupid shallow chick flicks and trashy romance novels which seem to have no relation whatsoever with reality.

7 Ways to Improve Your Marriage This Lent

Very practical, and again some points even relevant to us single people. It's written by Danielle Bean whose blog was one of the first Catholic blogs I started reading about eight years ago, I loved the stories she wrote about her life with her eight children. I even bought a book by her... for moms! And a few weeks before I left for the US, I dreamed that I was going to live next to her, and help her with her kids. Yes, I'm a little strange.


Well, marriage plus being Catholic often leads to babies, many of them, and then you get links to hilarious pregnancy anecdotes like these ones:

One of the few articles that actually had me laughing out loud:

7. I cried at Smiths when they didn’t have any ripe avocados and actually told the produce worker “I hope you are happy, you pathetic punk…. I hate you….” He then found me in the check out and handed me 2 ripe avocados and said “my wife is pregnant too, it’s ok.”

And the picture at the top of the article makes me want to laugh even harder.

And to close, shout out to Pope Francis whose words in 'Joy of the Gospel' are not only changing and inspiring me, but people all over the world in cool, crazy, and challenging ways:

More Quick Takes at This Ain't the Lyceum.