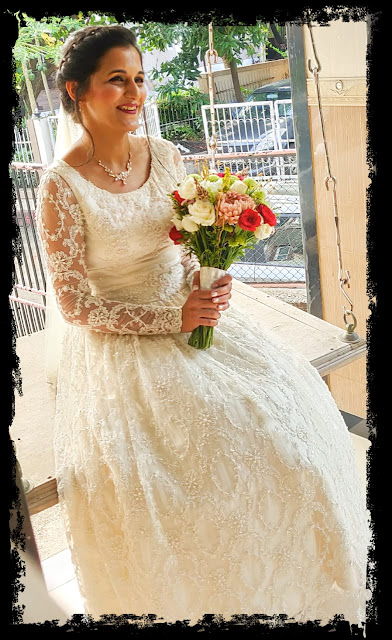 Full disclosure: It was on the 11th of December last year, before Joel had even proposed that I started texting my maid of honour, Teresa, about wedding dress options. I knew I was going to marry this guy. I had already decided I didn’t want to buy a dress, and wanted to borrow one from another mutual friend. I had attended her wedding a few years ago, and LOVED her dress, and had hoped I could use it since then since we were of a similar build. The mutual friend agreed, and in February, I had a wedding dress! As Joel and I struggled through making headway with the rest of wedding planning, I would joke, “At least I have a dress! The essentials are in place.”

Unfortunately two months before the wedding I came to the realization that the minor adjustments I thought I needed to make were not so minor. I was (gasp) a little broader than the owner of the dress. I very, very regretfully, urged on by my mother, tailor and fiancé, gave up the idea of wearing that particular dress.

Two months to the wedding, and no dress! Wouldn’t that be a valid reason for a Bridezilla meltdown? Okay, I’ll admit I shed a few tears, but since the Lord had been training me for a while to be detached from ‘stuff’, I was able to let go.

“You could buy a dress, you know,” my fiancé suggested.

“But I don’t want to. I’m sure the Lord will provide something. I’ll ask around.”

So I asked around. I sent out discreet messages though different friends who were likely to know recent brides. My good friend, Adele, called back.

She told me that she shared my message on her ministry team group, and to her surprise, a young unmarried man contacted her.

“I have some wedding dress material, enough to make a dress, to give away.”

What was a bachelor doing with wedding dress material?? Apparently a relative of his had ordered the material from Dubai for her own wedding dress, but it hadn’t arrived in time, so she bought another dress to use, and told him to give away this material to anyone who needed it.

Adele was beside herself with excitement, while I was, as is my wont, skeptical. Just because it’s free, doesn’t mean it’s the type of material I would like. I couldn't tell from the picture. Anyway, it is extremely expensive to get a dress stitched from scratch, so I was still hoping for a ready-made dress that would somehow miraculously fit me and be the style I wanted. But her excitement made me feel like I should at least give this free material a chance. I arranged with the guy who had it to pick it up from him on my next trip to Mumbai. 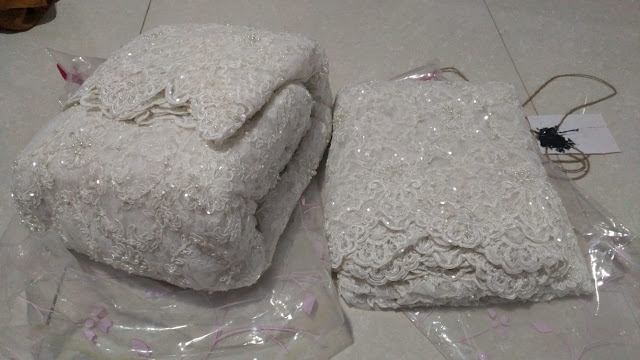 Meanwhile I asked another close friend if I could use her dress, as I was sure it would fit. It wasn’t exactly the style I wanted, but in the end a wedding dress is just a white dress, right? I picked up her dress the same weekend I was supposed to go to Mumbai, but didn’t try it on. When I picked up the material, I still couldn’t tell if I really liked the style. It was some kind of net with heavy embroidery and beading all over it, and there was a LOT of material. I took it back home with me to get my mum’s opinion.

I returned from that trip and finally tried on my friend’s dress. It fit perfectly, like it had been made for me.

“Let’s just look at the material too,” she said.

We opened it up and held it against the satin of the skirt of the dress. To our surprise, it looked beautiful over the satin. We looked more closely, and suddenly realized that the existing bead work on the bodice of my friend’s dress matched the material from Dubai exactly! I realized we wouldn’t have to make a dress from scratch, just find a tailor willing to add the material to the skirt and make sleeves for the dress too. I did find a tailor willing to do it within my budget, and willing to have it ready two weeks before the wedding. My aunt made a veil for me, and edged it with the same material as the skirt and sleeves. 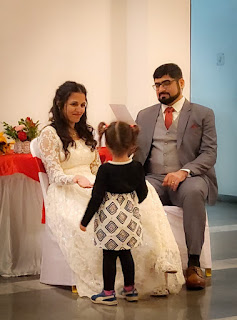 The dress was beautiful. I felt beautiful in it. It was modest, old-fashioned, and almost regal. I had a couple of little girls fascinated with my dress, who would just come up and stroke it. I grabbed the opportunity to wear it twice – once on my wedding day, and a few days later at a smaller party in my hometown. When I wrote about a friend’s wedding dress miracle a few years ago, I didn’t realize I would get my own too. Although God isn’t a magician or a genie who appears to grant our every wish, He is a Father who loves to surprise and delight His children with his unexpected gifts. Although not every detail of my wedding went the way I would have preferred, I was surprised, delighted and blessed by a beautiful wedding dress. 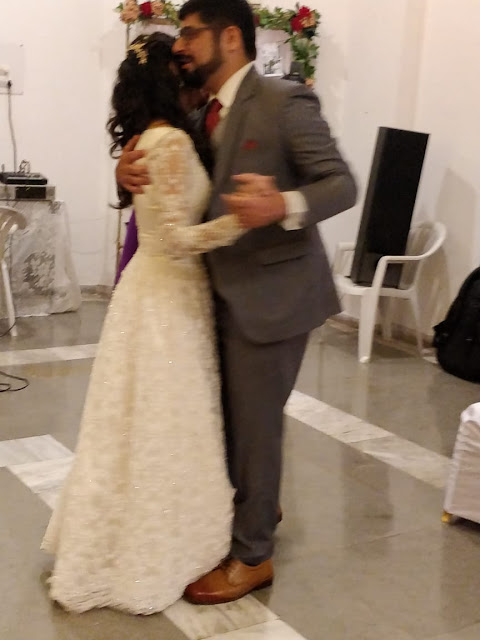 Ps. My sister-in-law, sister and I came up with a cool idea. We want to create a database of wedding dresses that women are willing to lend new brides in Pune and Mumbai. The new bride would look through the pictures of dresses, contact the owner of the one she likes, try it on, pay a deposit, use it, dry clean it and return it. It would save new brides a lot of money and be a small way for brides to bless other brides. Who is in?
Posted by Sue Zanna at 23:13