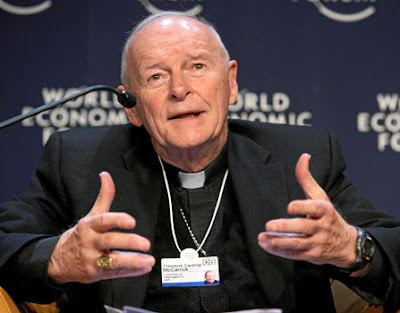 If you follow American Catholic media at all, and even if you don’t, you’ve probably heard some shocking news in the past few weeks – specifically revelations in a Pennsylvania grand jury report about decades of abuse and cover-up by predator priests and church official as well as credible sex abuse allegations against now-ex-Cardinal Theodore McCarrick. Euggh. How do we even react to this news? Here are some responses Catholics are tempted to make-

“It’s all lies made up to smear the Church.”

Um, no. Credible news sources (including respected Catholic news agencies) have reported all this, Just because you don’t like the news doesn’t make it fake news.

“I knew it. All priests and bishops are perverts or hypocrites. I never trusted them anyway”

NOT ALL PRIESTS. There are a GREAT many holy, humble, sacrificial priests who don’t make the news, but lovingly serve the people entrusted to their care. Most of us Catholics know several priests like that. They are as deeply disgusted and shocked by the news they are hearing.

“The Catholic Church is a deeply corrupt institution.”

Many of us have not understood that the Church operates on two levels – the hierarchical and visible structure, and the spiritual communion of all those who are believers in Christ and therefore the Body of Christ. The plan and hope and idea was that those two levels were to be beautifully integrated. The hierarchy should have been visible representatives of Christ the Good Shepherd, lovingly guarding and guiding His sheep. Alas, many who should have been shepherds have indeed been corrupted by power, by lust, by ego, by sin, and become the enemies of both Christ and His sheep. And yet the CHURCH is still the Body of Christ. And so I can criticize and demand reform in the hierarchical structures of the Church, and yet continue to love the CHURCH, the body of Christ of which I am a part.

“I cannot bring myself to go to Mass after hearing this news.”

It is understandable that people who have been traumatized by priests might find it very hard to return to the Church. We are not called to judge them. BUT, if you are reading this, don’t let sinners and abusers keep you away from Christ, who is present in the Eucharist. The sacraments are priest-proof.

"I think I am as sensitive as you (or any other Christian) to the 'scandals', both of clergy and laity. I have suffered grievously in my life from stupid, tired, dimmed, and even bad priests; but I now know enough about myself to be aware that I should not leave the Church (which for me would mean leaving the allegiance of Our Lord) for any such reason: I should leave because I did not believe, and should not believe any more, even if I had never met any one in orders who was not both wise and saintly. I should deny the Blessed Sacrament, that is: call Our Lord a fraud to his face." JRR Tolkien

“There is sin everywhere in the world, and abusers in every institution and denomination. Why are we making this such a big deal?”

Because this IS a big deal! How much more evil it is for those who are standing ‘in persona Christi’ to rape, to molest, to abuse, to take advantage of the trust and respect given to them by the little, innocent ones. It makes me sick. And even worse are those who knew and covered it up, and enabled them to continue. And if we act like it’s not a big deal, we are complicit too because we are denying justice to those who are crying out to be heard, and we are enabling an environment where such things can continue.

“Must we focus on the negative? There are so many good things happening in the world.”

Saint Augustine said, “Hope has two beautiful daughters. Their names are anger and courage; anger at the way things are, and courage to see that they do not remain the way they are.” We cannot hope for or work for change if we cannot admit that there is a serious problem. Not only do we need anger and courage, we need to be willing to ‘weep with those who weep’ instead of shushing them as they have been shushed too many times before. If one part of the Church is hurting, the whole Church is hurting. If there is poison in one part, it will affect the whole.

Don’t make this about your pet issue. This is a bipartisan issue, and we need to approach it together. Whether you are right wing or left wing, if you are against abuse and for accountability, then we can work together to eradicate it from the Church. All priests who have SSA are not abusers. Many are chaste and sacrificially serving the Church. Don’t demonize everyone. The people to blame are the people who have been documented to have committed crimes.

“We are all sinners. Who are we to judge?”

No. When you hear about a rapist, the correct response is not 'we are all responsible in some way'. That is practically victim-blaming. The one who is to blame is the perpetrator and anyone who covered it up, or could have done something and didn’t. If you know about abuse within the Church and are covering it up, then yes, you are to blame. The point isn’t judgment or condemnation, but justice, fighting for and speaking up for the oppressed and victimized. You can’t stop crime by calling everyone a criminal. Yes, we are all sinners, but we have not all raped, molested or covered up abuse.

God knew. God cares. He cared enough to allow His Son to die on a bloody Cross to share in the ugliness and the pain of those that suffered. God is on the side of the oppressed. God cares about justice. Every abuser will have to face Him one day. The tears of every one who has been abused will be wiped away one day. He promises that one day EVERYTHING that is wrong will be made right. I don't know why not yet. But I know He cares.

So far, one Papal Nuncio has accused Pope Francis and Pope Benedict of knowing about ex-Cardinal McCarrick. I SINCERELY hope he is lying. And yet, I am waiting for proof one way or another. I will not defend or accuse anyone without proof to substantiate his claims. It's going to come out sooner or later. But I will not let my previous loyalties or dislike of anyone influence me either.

“What’s the point of talking and writing about it if we can’t do anything about it?”

But we CAN do something about it! We can fast, pray and demand accountability. We can beg God to bring renewal to our unholy and yet holy Church. We can commit to speaking up for the voiceless, in spite of what it costs us. We CANNOT care more about our good name or the good name of the Church than we care about the protection of the innocent. Like the movie Monsoon Wedding, where Naseeruddin Shah's character saying as he throws out a beloved trusted male family member who turns out to have molested his niece, "I will protect my family even against myself."  We cannot compromise or be hypocrites. We can ask God to raise up prophets and saints, and we need to be willing to be the ones He calls on. We need more like Saint Catherine and Saint Francis. And we need to be the change we want to see.

We also need to take up our call as laity to see ourselves as the Church as much as priests are the Church. We need to continue the work of Christ in the world whether or not we have a holy and humble hierarchy working with us. Be a leader. Be a saint. Be a prophet. Good will prevail.

"This is an American problem."

I'm very afraid that in India where there is even more fear of and unquestioning obedience to authority, fear of shame and scandal, and a tendency to treat priests like they are gods, that we have an environment very conducive to abuse and cover-up. I am both afraid of when it's all going to come out, but in a way, also hopeful that it will happen. It will be disgraceful and humiliating, but if that's what it takes to get justice for the silent victims, and to begin change in the way we do things, then let it be so. Already a few stories have started coming out, and I have heard whispers of others. Have mercy on us, Lord. Let's be prepared.

There is so much more to say about this. But let us start by praying, fasting and begging God for renewal.

UPDATED: Bishop Robert just posted this video. As usual, he is a voice of reason and wisdom.