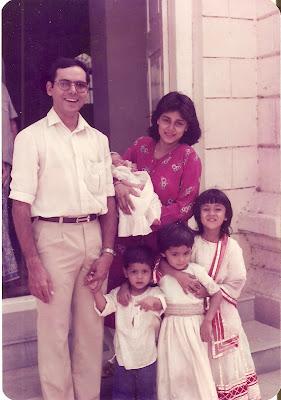 A few days ago at our after school tuition (tutoring) class in the slum, I was ‘taking up’ one girl’s Hindi answers. All the kids had Hindi or Marathi exams the next day, so I was roped into helping them prepare for their exams. And as all Indians know, the way to prepare for an exam is to memorize a bunch of answers given by your teacher. But that’s a rant for another day.

My Hindi isn’t awesome, but I can read and write (even if I don’t always know what I’m reading or writing... I used to fake it when I had to read passages in class). My students know that I’m not comfortable in Hindi or Marathi, so they were fascinated to hear me read Hindi aloud. (They still haven’t decided whether I’m really Indian or not.)

So I was taking up an answer based on a story in their Hindi textbook. I was mindlessly following the words to make sure she said the right ones, when my attention was caught by the last line: ‘Chota parivar sukhi parivar.’

Or ‘A small family is a happy family.’

My eyebrows shot up. “What? What is this lesson about?” My thirteen year old student explained. It was a conversation between a man who had three daughters in the quest for the elusive son, and a man who had just one daughter. The man with one daughter was explaining to the man with three that a daughter was as good as a son, and he didn't have to have a son in order to be happy. He was addressing a very common problem in India: gender inequality. It is not unusual for people to keep having children... until they get their boy. In fact, someone who heard my dad had five kids, assumed that the four oldest were girls. Because of course, boys are the ones who bring in the dowry, are likely to get jobs and financially support the parents when they are old. Whereas girls, those useless creatures, are nothing but trouble- parents have to PAY to get rid of them, and once they are married, their allegiance is to their new family.

I have heard of these attitudes, but never experienced them personally because I grew up in a family that doesn't do dowry, and values both sons and daughters equally. But my student looked at me and said, “Boys are bad. But everyone think girls are bad. In my place it is like that.” Girls occupying an inferior place to boys in their families is still a reality.

Well, it’s good that the text book was trying to attack this unhealthy and unfair and very prevalent attitude through the story. But the next line mixed a very different moral into the lesson – a lesson that has been permeating all of Indian education for many decades: A small family is a happy family. Or the root of all India’s problems is TOO MANY CHILDREN. Or the population. Overpopulation, population control, population problems, we never heard the end of it. To the point that, any family that had more than two kids is considered unpatriotic, anti-progress, and probably kinda uneducated.

Now, I do realize that there are legitimate reasons to limit the number of children in one’s family. If you really can’t feed or care for the children you do have, or you are struggling with sickness, or mental health issues, or any of a number of difficult situations, then it would be responsible to attempt to limit your family size. But that isn't the situation of most people I know in middle-class India, nor is it what the government is suggesting. The government says ‘Hum Do, Hamare Do”- “We two, our two.” Have only two children, get yourself sterilized (or we might forcibly do it to you*) and never commit the sin of having a third child... let alone a fourth or fifth. “You can improve your quality of life with less children” is another not even subtly selfish reason. And with a better 'quality of life' (a TV? a car? going on holidays? a bigger house?), of course, your family will be happier.

I’m one of five. And my parents received a certain amount of flack for that, and so did we. A Catholic teacher in my Catholic school publicly mocked my sister (a fourth child) for coming from a large family and asked if her parents were uneducated.

People around us had been brainwashed into thinking that another baby is a CURSE, not a BLESSING... to their family, to their country. Especially for those of us who are Christians, we should recognize that as a lie. The bible tells us that children are a blessing from God. All children, not just the first two. Every child is precious, valuable. Whether they are the fifth, the tenth, or the only child. Whether they are physically or mentally challenged. Whether their parents are struggling to make ends meet, or have just upgraded their Maruti 800 to a Scorpio**. The child isn't the problem.

And you know what else, having a bunch of kids in our family didn't make my family an unhappy family. I never wistfully imagined how much happier my family would be if only they had stopped having kids after me. I may have had more of a choice about which movie to watch (Rose and the Slipper over the A team, but I had to compromise many, many times), and more pocket money. I may not have had to wear as many (ugly) second hand clothes. But I definitely can’t say I would have been happier without my three younger siblings. 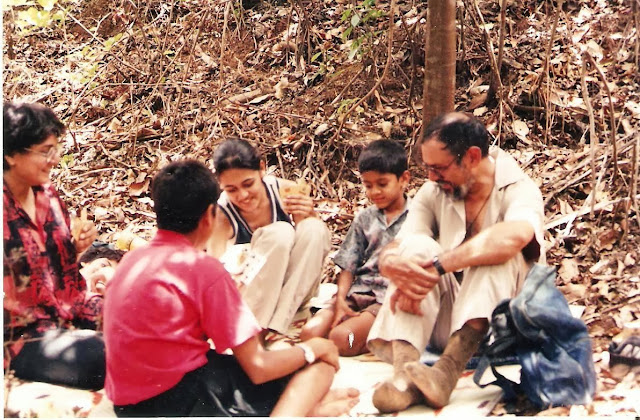 Humans are not just resources, or burdens, or things. You can’t reduce them to ways to help or hinder a country. A country is after all not just a piece of land, but is made up of every citizen... even if he or she happens to be a fifth child. Instead of saying ‘Have less children, and all our problems will go away’, let’s look for ways to use the resources we do have better.

If you can afford to, have another baby. If you can’t afford to, and another baby comes anyway, welcome him or her with joy. Because the happiness of your family doesn't depend on how many or how few children you have, or even how much or how little money you have, but on how you value each unique, lovable, irreplaceable person that God gifts you.

"More people means more ideas, more workers, more love, and more hope. And so, I don’t see my children as adding to the problem; I see them as contributors to the solutions of the future."

The Earth is a Nursery by Simcha Fisher

*It happened in 1976 and it's happening still-coercive female sterilisation practices.
**Yeah, I know nothing about cars.
Posted by Sue Zanna at 12:26