This is an old blog post I wrote two years ago when R and I lived on an island in the Philippines for a few months. (Yes, we have lived an interesting life.) 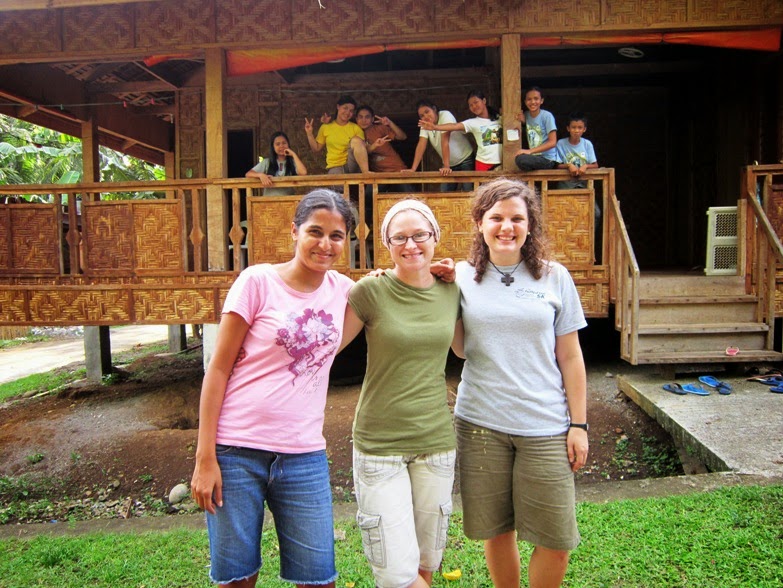 Are you sure you are ready for this?

I’m not sure I am. Perhaps it is too soon.

Last night R and I were home alone, working on different things. As I sat on my bed with my bible, the blades of the fan suddenly stopped whirring. Uh oh… another blackout. It was dusk, but we weren’t too worried because we had an emergency light supplied by the priest, and a cool head lamp which made us look like the lamp in Pixar animations. R managed to cook a yummy dinner of eggplant, tomato and spices left to us by S. We ate in the kitchen with the flashlights. All was well. The calm before the storm.

After dinner, R showered, and I settled down to one of the few things I could do in the dark- listening to an awesome talk by Dr. Peter Kreeft on ‘Arguments for the Existence of God’. Eight minutes into the talk, I heard R outside our bedroom. Her voice was a little stressed out.

“There’s a giant spider out here.”

“Yeah, it can’t be THAT big,” I thought. “Some people just have a phobia of spiders.”

“Do you want me to come rescue you?” I asked lazily.

“Maybe… come give me some moral support…?”

As I was getting up, she shouted, “Oh no! It’s going inside!”

In the shadowy half light from her flashlight outside, I saw a huge dark creature climb into our room through the window.

“AAAAHHH!” I screamed. “It’s in, it’s in! I see it!!” I desperately tried to switch on the headlamp, but I couldn’t seem to find the switch, and I was filled with all the terror natural to anyone trapped in a dark room with a giant arachnid. Finally I got the light on, and R burst in with her light… and then I saw it. Crouched in the corner of the room was A GIANT SCARY BEYOND IMAGINATION SPIDER! It was huge!

“That is HUGE!” I squeaked.

I desperately looked over the room for anything that could serve as a weapon.The only vaguely possible thing I could find was a pillow, yeah, real deadly weapon. R managed to find a shoe.

“Me neither,” I screamed/laughed back.

“But we can’t let it get any closer to our beds!”

R, usually so calm and collected, danced back and forth, shoe in hand. “I can’t do this… Okay, I’m going to do it, but I need you to look and see if I get it. I can’t look!”

Finally she lunged for it, and missed, which was the cue for both of us to scream (like girls). Thankfully, it scuttled toward the doorway instead of the beds, and R attacked again, and got it. Now it gets REALLY creepy. One of the reasons it seemed so huge was because it was carrying an egg sac. Cue creepy, evil, psychopathic-killer-about-to-get-you music.

Yes, as she hit it, she hit the egg sac, and millions of little spiders burst out and began scurrying in every direction. This is when the screaming got serious. But in the midst of the horror of it all, R responded with action.

“POISON! We need POISON!” She rushed off, while I dragged her mattress back and began to kill baby spiders with her shoe. It was a spider massacre. Our entire neighbourhood was pitch-black because of the blackout, and at this opportune moment, we heard voices emerge from the darkness.

“R? Sue? Are you alright?” Without leaving my grisly job, I answered, “Yes, we’re okay. Who is that?” It turned out to be one of the school employees who lived two houses away from us. Yes, apparently the entire neighbourhood had heard our screams of terror. After we reassured her that we were okay, she and the other voices retreated. We heard them talking and laughing with some other neighbours down the street. “Spiders... ha ha ha.” That’s one way to get to know the neighbours, right?

R brought out our only supply of poison-Repel100 and sprayed the remaining baby spiders, then wiped down the entire area with Lysol. Shuddering, she climbed up onto my bunk bed, and we spent the next hour in a lecture room with Dr. Peter Kreeft listening to an interesting talk on the argument from design, the argument from desire, Pascal’s wager, and trying hard NOT to think about egg sacs.

P.S. Due to an overactive imagination, reading Charlotte’s web as a child had given R an extreme phobia of spider’s egg sacs. Truly a nightmare come true.
Posted by Sue Zanna at 23:13

Email ThisBlogThis!Share to TwitterShare to FacebookShare to Pinterest
Labels: The Funnies